Cindy Moss works in a place called the “Batlab.” In the Batlab, her research laboratory at the University of Maryland, Cindy and her graduate and undergraduate assistants are studying the way free-flying animals use echolocation to locate objects in the environment. Sometimes, this means they hang worms from strings for bats to locate and eat as they fly around the room. On other days, when working with a colleague studying hearing in insects, they might put a praying mantis and a bat in the Batlab together to observe their methods of detecting each other!

Observing bats and animals is made easier by the methods Cindy and her team have developed. They placed high-speed cameras and microphones on the walls and floor of the lab, which lets them track the bats in 3D. From the images and sounds recorded in the Batlab, the scientists create animations that they slow down to get insight into the bats’ behavior (bats fly at about 3 meters per second). They were able to see that bats aim their “sonar” like a flashlight, beaming it around the room to find their prey.

How did Cindy end up in the Batlab? Her interest in science started when she was very young. She used to explore the woods near her house, and bring home frogs, tadpoles and turtles to observe. As she got older, she was interested in languages and art, too. As an undergraduate at Hampshire College and the University of Massachusetts, she started studying psychology and zoology, and the mix of the two. Her Ph.D. work at Brown University and post-doctorate work in Germany got her more into neurobiology in general and bats in particular. Bat echolocation research has taken her into the study of acoustics.

Her advice to aspiring young students is to imagine that you are a scientist already. Ask questions, then design, plan and carry out projects that will help you find the answers. You may discover interests you didn’t even know you had.

You can find Batlab movies and videos at: 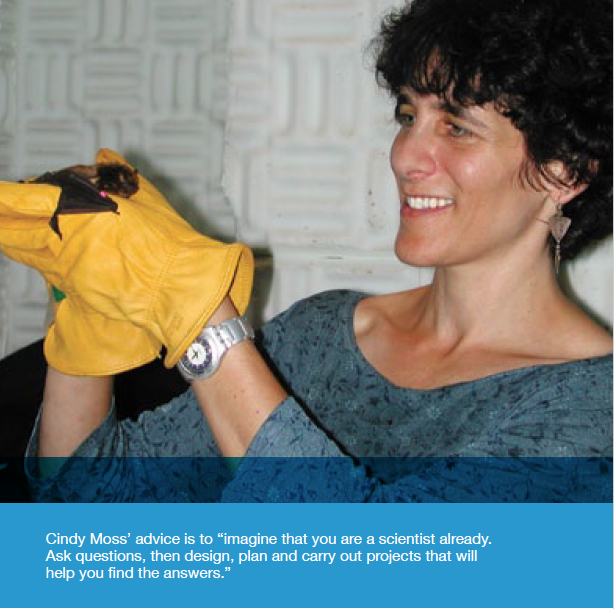 Back to Career Archives
Manage Cookie Consent
To provide the best experiences, we use technologies like cookies to store and/or access device information. Consenting to these technologies will allow us to process data such as browsing behavior or unique IDs on this site. Not consenting or withdrawing consent, may adversely affect certain features and functions.
Manage options Manage services Manage vendors Read more about these purposes
View preferences
{title} {title} {title}
Go to mobile version