If we cant see animals because of their naturally secretive behavior, how do we know they are really there and in what numbers so that we can make responsible conservation policy decisions about vulnerable habitats?

This situation is exacerbated in Polar Regions where peculiar logistical difficulties of working in pack ice make survey effort enormously expensive, so a further challenge is to gather data cost-effectively.

Acoustics, seeing animals with sound using an animals vocalizations as a proxy for field sightings, can be a simple, cost-effective tool. Some marine animals have stereotyped long-range signals which are ideal for cost-effective, repeatable surveying. We have been modelling sounds-per-animal over a unit of time as a relative population index for a given species a sound census. We are working with the leopard seal, an Antarctic top predator that is difficult to survey (Figure 1). We have been following changes in their behaviour on disparate sides of the Antarctic continent. We’ve been using their acoustic behavior to follow changes in their spatial behaviour as all five of the call types produced by the leopard seals within the Davis Sea off Eastern Antarctica, are in a stereotyped fashion. Adult male leopard seals call at a constant, stereotyped rate, and as we have an understanding of age-related differences, the number of leopard seal calls over a given period can be converted into the number of vocalising seals present at that time (Figure 2). 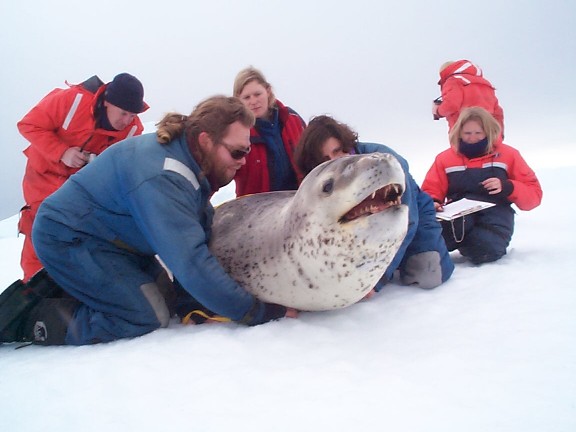 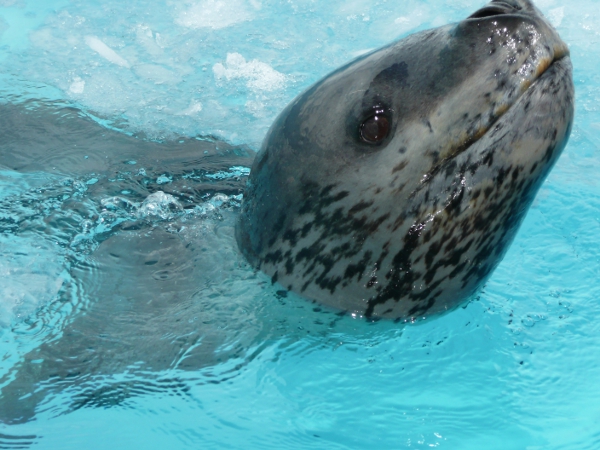 This kind of model requires information on the production of vocalizations including seasonal calling patterns, daily calling patterns, and vocalizations that identify individuals and gender. A calls usefulness, in this context, is the interplay between the stereotypy of the calls production with its signal propagation characteristics which determine its detection threshold distance, which is the area over which it can be detected.

We are enormously fortunate to work within a field where our international colleagues from diverse disciplines are pushing forward the frontiers of possibilities. The advances in sophistication due to acoustic engineers, physical acousticians, oceanographers and modellers, has allowed ecologists like myself to explore cost-effective ways, using sound, to glean information about the behavior of secretive, rare, or low‐density marine species, which not that long ago was not possible.

Acoustics offers enormous possibilities for marine studies, and although we used a simple system — recordings from remotely deployed hydrophone units (sonobuoys) — the recent increase in sophistication of the capabilities of acoustic devices provides an array of systems from stationary units consisting of single or multiple hydrophones, single hydrophones deployed on individual animals, to multiple sensors on towed or bottom-mounted hydrophone arrays, providing data across a range of spatial scales. Additionally, passive-acoustic surveying is a robust data collection system. Data is largely independent of collection error and inter-observer bias, and it can be archived providing useful information on multiple species, not just the target species at the time of the study, which could prove useful if we are to see long-term community composition change.

Significant changes in physical and biological systems are occurring on all continents and in most oceans, but the concentration of data available has been biased towards terrestrial systems. Recent work is revealing that both the abiotic changes, such as ocean circulation and ocean chemistry, along with biological responses are substantially more complex within the ocean than within terrestrial systems. Also, synergistic effects between climate and other anthropogenic variables, particularly fishing pressure, are likely to exacerbate climate-induced changes within the marine system, where following change is likely to be substantially more difficult, both logistically, as well as more expensive. Where should we invest limited conservation/research funds to protect biodiversity?  It is an important question.

The first time I walked up a gangplank to work in Antarctica on leopard seals was twenty years ago, and at the time the ability to work on marine mammals within the pack ice was rather limited. Today however, with the advent of sophisticated marine engineering, coupled with an understanding of behavioural ecology, tables have turned.

As climatic change affects a broad range of organisms across geographic boundaries and more often in logistically difficult regions which are remote, marine and/or polar, using simple (as well as complex) passive-acoustic methodologies are cost-effective tools that are robust, archival, and target multi-species within many systems.   Information yielded by these new approaches can include data about population density, natural history and habitat use all foundational elements of conservation management and policy.