Back to all Lay Language papers

Sound levels at collegiate athletic competitions are a much-discussed topic among sports fans, coaches, players, and sports media alike. Different venues are often anecdotally dubbed as harsh places to play based on the crowd noise generated by fans. In football, prior to every play the quarterback must communicate effectively with the rest of his team. When a visiting team cannot communicate due to crowd noise from the home fans, the home team realizes a distinct home field advantage. Although this is a mainstream topic in acoustics, very few scientific noise studies have been conducted during college football games and subsequently published in the literature of the acoustics community.

In the fall of 2009, a team of researchers from the Graduate Program in Acoustics at PSU made crowd noise measurements in Beaver Stadium (Americas largest college football stadium: cap. 107,282) in State College, PA, during PSU football games, see Figure 1 for pictures of Beaver Stadium. The main goal was to map the crowd noise throughout the entire stadium to show the noisiest locations on the field, and, in turn, the sections of fans who were the loudest contributors. Crowd noise recordings were also made specifically in front of the student section. These recordings were/are being used by the PSU Nittany Lion football team in their practice facility to prepare for away games where they will be in the presence of a loud opposing teams crowd. Finally, a simple noise model of Beaver Stadium was developed to illustrate which portions of the crowd were contributing the most to the on-field noise. 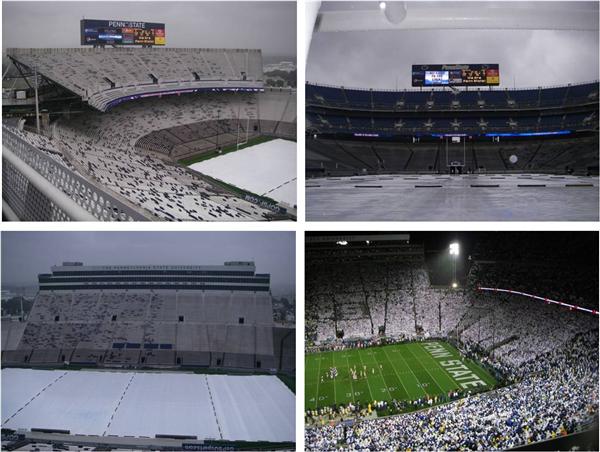 To effectively map the crowd noise around the field, 8 sound level meters (SLM), hand-held sound pressure level (SPL) instruments that measure sound in absolute decibel (dB) levels, were placed around the sideline and endzone areas. Additionally, 3 SLMs were placed in the stands above the crowd. The SLMs recorded averaged sound levels every 10 seconds throughout the entire game. All SLMs were time-synchronized and were synchronized with game events afterwards. A short animation was created showing the crowd noise levels, in dB, throughout the first half of one game (see Movie 1). The colored circles indicate crowd noise levels at the indicated locations. High crowd noise is indicated by red color/large circles while low crowd noise is indicated by blue color/small circles. Colored bars across the field indicate the team on offense and the approximate location of the line of scrimmage. Notice that the crowd noise is much higher when the visiting team has the ball than when the home team is in possession. We showed in a previous study that the crowd noise increased from about 75-80 dB when the home team quarterback was calling plays to 100-110 dB when the visiting team was trying to call plays. Thats like the difference between a normal radio playing and the speakers at a rock concert. In terms of effective communications distance, the home teams quarterback can communicate with other players up to 20 feet away while shouting; whereas, the visiting teams quarterback is limited to communications ranges of less than 2 feet, even while shouting.

Movie 1. Animation of pregame and the first half of the PSU-Iowa football game. Note that south is up in this schematic and the student section is in the upper left of the animation.

Figure 2. Photos of sound level meter mountings during the game. From left to right: mounted on the goalpost, mounted to a hand-held pole on the 10-yard lines, and mounted to a railing on top of the press box. Note that all the SLMs were wrapped in plastic bags due to inclement weather conditions.
Below are links to different crowd noise recordings that were made in front of the student section. They are currently being used by the PSU Nittany Lion Football team from practice and preparation purposes.
“We Are Penn State” chant famous to PSU.
Opening kickoff. PSU crowd builds up to a crescendo as the ball is being kicked.
Iowa in possession, 3rd down results in a PSU interception. Notice how the home crowd is very loud while the opposing quarterback is calling the play, then is quieter during the play, then erupts after the resultant interception.
PSU touchdown and resulting celebration by the crowd.

Finally the student section was evaluated with respect to how effective it was at projecting noise on the field. Measurements were taken in an empty Beaver Stadium using a HEAD Visor acoustic array and a portable sound source. The sound source was moved throughout the student section, played at the same output level at each point, and recorded by the HEAD Visor system. Figure 4 shows the HEAD Visor array and the sound source. This data was used to make a simple model of the student section and show what portions of the section were/were not contributing to the sound levels on the field. Students were assigned noise levels 6 dB louder than other fans since the students are the loudest demographic. The model was then manipulated to virtually move the students around into 2 alternate configurations. Figure 5 shows the three cases for the model. Comparison of Case #1 and Case #2 showed that there was no difference in the on-field sound levels between the cases meaning that the upper section of students is not contributing significant noise to the field. Case #3 was an attempt to improve the ability of the student section to project noise onto the field by surrounding the endzone with students. Results from Case #3 showed a 1 dB drop in noise levels on the east side of the field, but a 1 dB and 3 dB increase in noise levels at the center and west sides of the field, respectively. According to this model, by rearranging the student section around the endzone crowd noise would be more evenly distributed over the south end of the field. 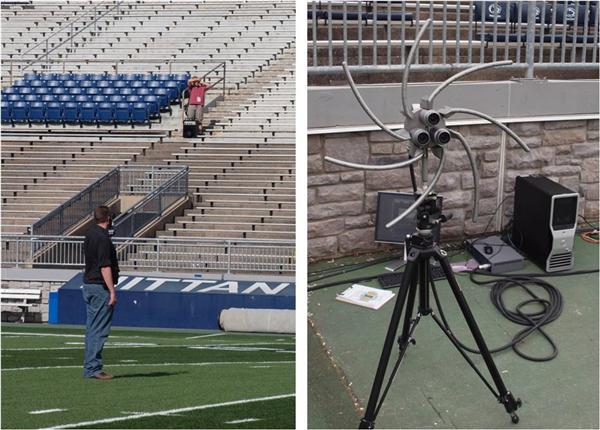 Figure 4. Hardware setup for the HEAD Visor tests. Sound level meter on the 13-yard line and sound source at one location (left) and the HEAD Visor system set up on the sidelines (right).

Figure 5. Schematic of the 3 cases that were run of the noise model for the south end zone. Green circles represent the receiver locations at the 13 yard line. Note that south is up in this schematic. Case #1 has 38,176 spectators (21,205 students, 16,971 other fans), Case #2 has 26,622 spectators (15,428 students, 11,194 other fans), and Case #3 has 38,176 spectators (21,170 students, 17,006 other fans).
The authors hope to compile data from the 2009 games as well as games recorded in 2007 into a database for college football crowd noise which could be made available to the public via a Web site. In this way researchers from other universities could make similar measurements and compare crowd noise levels around the entire country. This data could also be used estimate the effects of stadium noise on nearby communities using outdoor sound propagation modeling software.

Back to all Lay Language papers