Noise from Energy Efficient Hand Dryers: Is This Progress?

Within the last decade, new hand dryers have been designed to provide improved hand drying while using significantly less energy. However, numerous people have noted that these new hand dryers are significantly louder than the older, less energy efficient models. These loud hand dryers have been mocked on television (in the series Community on NBC) and in cartoons (just try a Google search on Hand dryer cartoons). From a practical perspective, the noise from the new hand dryer models frightens infants, interferes with conversations within toilet rooms and in some cases can be disruptive to other nearby rooms.

In a review of various hand dryer models, the manufacturers ratings for energy usage show that the new generation of hand dryers uses about of the energy of an older model hand dryer. The manufacturers also report that the sound levels from these new dryers are only about 30% to 50% louder than the older models.

A survey was conducted to measure the sound levels from several different models of installed hand dryers. During the survey, the measurements were performed with and without hands in the airstream. This was found to be a significant factor to the loudness of the hand dryer. For some newer hand dryers models, high-speed airflows blowing onto the hands generates substantially higher noise levels.

The following survey results do not lend themselves to precise comparisons between the various models. The architectural differences between the toilet rooms were not assessed, and may have influenced the sound level from the installed hand dryer. Nonetheless, the measurements would be similar to those that any person could experience, if they visited the same establishments.

The first hand dryer is typical of the hand dryer models that have been around for many years and which have been used by many fast food restaurants and other establishments (see Figure 1). Typically, the operator pushes a button to start this model hand dryer. These dryers often require between 30 and 50 seconds to effectively dry wet hands, relying primarily on the hot air from a electric heating element and the users rubbing their hands to perform the drying.

Sound pressure levels from this hand dryer were 82 dBA regardless of whether there were hands being dried within the airstream. 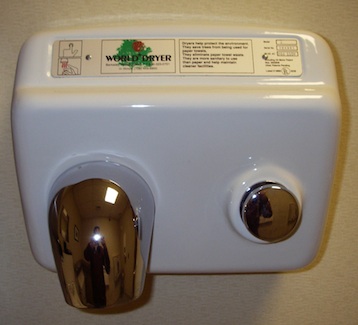 The next hand dryer was considered one of the first high efficiency models, introduced back in 2002 (see Figure 2). This particular model is noted to produce extremely high-speed airflow, which are about 2 times faster than the older models. The high-speed airflow blows the water off of hands inserted in the air stream, and can dry hands in about 10-15 seconds. An infrared optical sensor activates this model, so that the dryer only operates when there are hands below the nozzle.

Hands within the stream of the high-speed airflow create significantly higher sound levels than when there are no hands in the air stream. Because hand dryers work most effectively when the hands are in the airflow, the noise level that users will typically experience might vary between 95 dBA and 100 dBA at this establishment.

The Excel Dryer company has developed a Noise Reduction Nozzle (see Figure 3) that reduces the airflow velocity from the discharge. The manufacturers specifications indicated almost a 50% sound level reduction with this alternate nozzle. But because this larger nozzle reduces the airflow speed, the drying time is increased by 2 to 3 seconds.

The survey confirmed that the alternate nozzle reduced the noise levels that most users would experience by about 50%. 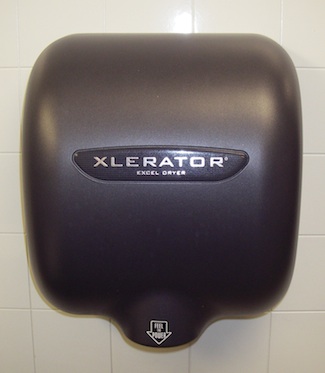 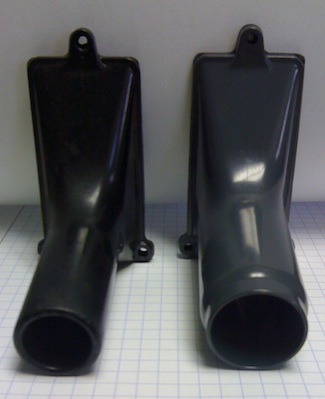 Of the hand dryer models that were studied, the Dyson Airblade model had the most unique design (see Figure 4). This hand dryer differed from other conventional dryers because this dryer uses narrow slits of high-speed air to wipe the water off of both the front and back of the wet hands simultaneously. Figure 4 shows this hand dryer installed in a hotel toilet room. The yellow elements seen in the figure are the narrow slit nozzles for directing the high-speed air at the wet hands, which are inserted, hands facing down, into the opening at the top and then pulled out again. The manufacturer reports that the airflow passes through the slits at 5 times the airflow speed of an original hand dryer model. The high-speed airflow clears the water from wet hands in as few as 12 seconds. This hand dryer was also certified as a hygienic model by an international sanitary organization.

The sound pressure levels of this model varied between 90 dBA with hands in the airstream and 87 dBA with no hands.

There seem to be an endless number of new energy efficient hand dryers being developed, with many of these newer models marketing themselves for their quieter sound levels. These models (and the manufacturers reported sound levels) include: the Clean Dry (58-62 dBA) by Toto, Jet Towel (65 dBA) by Mitsubishi, Airforce (83 dBA) and AirMax by World Dryer, and SpeedFlow by Saniflow.

From a practical perspective, the sound pressure levels of these excessively loud hand dryers can interfere with bathroom conversations. The hand dryer noise can also be an annoyance for nearby spaces. Noise reduction options, different unique designs and continued alternatives from other manufacturers provide lower noise options for owners and facility managers who may want to select hand dryers for their lower noise emission levels. 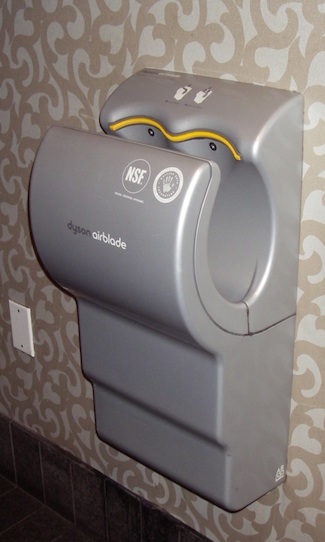