Innovative, proactive regulation can successfully drive product development for lower [infopopup tag=noise] emission levels to the benefit of the community and workers. In 2002, the New York City Department of Environmental Protection (DEP) undertook to completely revise the city’s Noise Code; the first major recrafting of the code in thirty years. The goal was to improve the quality of life for the people of New York City, but it is also having the collateral benefit of reducing occupational noise exposure for construction workers.

Construction noise is a perennial problem. Many jurisdictions simply accept as fact that some operations and equipment are inherently noisy, and give them a pass or apply curfews. However, this noise source is addressed forthrightly in the new code and the Rules For Citywide Construction Noise Mitigation, which were promulgated in 2007. The Rules provide specific guidance on equipment selection and incentives for the application of best management practices and the use of quieter equipment.

A muffler for jackhammers (pavement breakers in the U.S. and concrete breakers in the E.U.) was suggested by DEP staff. They reached out to Key Span Energy (now National Grid), a utility that provides natural gas to most of New York City, who in turn contacted Zo-Air Company, Inc. (Holbrook, NY), which supplies pavement breakers and other industrial tools to the utility. Zo-Airs founder, Robert Aicher, set about the task of developing the jacket in 2006, after major manufacturers declined to get involved. He named the muffler the No Racket Jacket.

The jacket, shaped like a cylinder open on one end, covers the housing from just below the handle bar to the opening for the chisel (Figures 1, 2). It encloses the cylinder case, the exhaust (including muffler, if present), and the front head. There is a 3.2 cm (1.25 in.) inch opening at the bottom through which the chisel can travel. Not only does this significantly reduce the sound emissions of the unit, it also serves to insulate the operator from the exhaust air of these pneumatic units and the oil often spewed onto the workers legs. The exhaust air and oil escape around the chisel at the bottom, and Aicher says theres no significant back pressure buildup to impair the operation of the breaker.

The jacket is made of three layers of a material described as neoprene-like which are sewn together, and the closure is 4 inch wide industrial Velcro. The jacket requires an upper strap over the handle bar, much like suspenders, to keep it from blowing off due to the air pressure. The whole jacket weighs approximately 1 kilo and can be installed in 30 seconds. 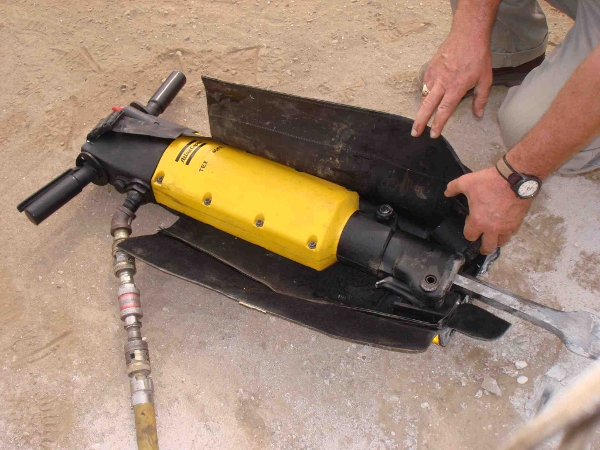 Sound level measurements show that the jacket reduces the sound levels by between 3-10 dBA, as compared to measurements of the same unit without the jacket, at a distance of 15.2 m (50 ft). A reduction of 10 dBA is perceived as a halving of loudness.

In a sampling of one unit, the reduction of sound levels at the ear of the operator was approximately 5 dBA when the jacket was used. A reduction of 5 dBA or greater at the ear of the operator is significant. The U.S. Occupational Safety and Health Administration (OSHA) established occupational noise exposure standards at 29 CFR 1910.95. Those standards allow a doubling of the duration of exposure with a reduction of 5 dBA. The reduction in exposure levels could also make the selection of Hearing Protection Devices (HPDs) less rigorous. For instance, it may not be necessary to employ double protection of plugs and muffs, which could increase compliance with HPD use. 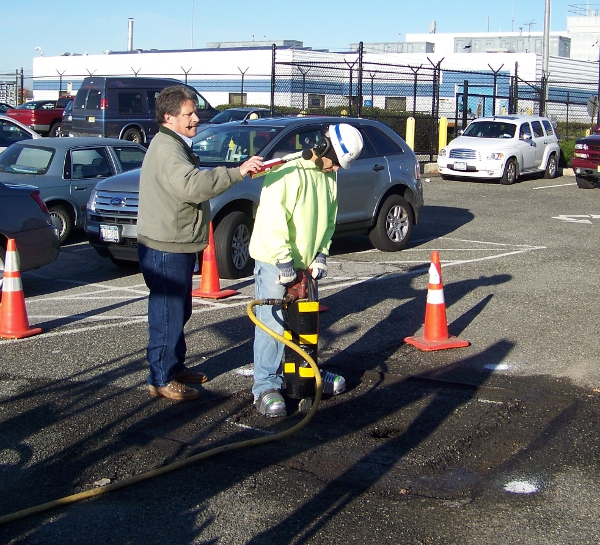 Currently, in the United States, there are no product noise emission standards for pavement breakers. The U.S. Environmental Protection Agency Office of Noise Abatement and Control (ONAC) identified pneumatic pavement breakers specifically as a piece of construction equipment which required noise RD&D (research, development and demonstration), and it was set on the path to regulation. In 1982, ONAC was defunded, and the pavement breaker was disidentified for regulation.

In contrast, the European Parliament and the Council of the European Union published Directive 2000/14/EC establishing noise emission limits for equipment used outdoors; only equipment which complies can be sold in the European Union. In this study, the quietest pavement breaker tested was manufactured to the EU standard, also demonstrating that proactive regulation can drive the marketplace.