New approaches suggest the possibility of artificially producing speech based on measuring facial movements with either attached facial probes or ultrasound. Such techniques could allow people to communicate through speech in places where it would otherwise be difficult or impossible. In noisy places, their facial motions could be measured, and the corresponding artificial speech could be played on noise-canceling headphones or on speakers in a different, quieter location. In places where a person does not want to be heard, these techniques could allow silent speech where words are only mouthed. If a person can silently produce the same facial movements as in typical speech, these could be used to produce speech on headphones or on speakers in another location where it would not be obtrusive or public.

In our experiments, we used Surface Electromyography (EMG) and Acoustic Doppler Sonar (ADS) to measure facial movements. EMG uses probes attached to a persons face to measure the electrical impulses that control various muscles used while speaking. Different muscle configurations are necessary to place and move the articulators, which are the parts of a persons anatomy used to produce speech sounds. Our measurements are based on the electrical signals coming from 5 sets of probes placed to detect activity for specific muscles (see Figure 1). 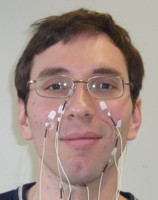 Acoustic Doppler Sonar (ADS) is based on bouncing ultrasound off a speaking persons face and measuring the changes that the velocities of the articulators make to the ultrasound wave. An ultrasound wave with a [infopopup tag=frequency] of 40 kilohertz (humans are typically unable to hear frequencies above 20 kilohertz) is transmitted towards a speakers face from the distance of a typical desktop [infopopup tag=microphone] and a sensor is used to receive the reflected, modified ultrasound wave. Figure 2 shows the ADS hardware.

After using one of these techniques to measure facial movements, there is still the question of how to use this information to produce speech. Trying to construct a full physical model that would account for all the placements and motions of the articulators would be very difficult and error-prone. Instead, we adapted a statistical technique from the field of Voice Transformation to construct a generalized correspondence between the facial movement measurements and microphone-recorded speech.

From a more general viewpoint, Voice Transformation is a way of taking one type of data and converting it to speech, as long as this data is from a process that is correlated with the produced speech. As this is indeed the case with EMG and ADS data, we used this approach to convert from EMG and ADS data to speech.

Objective measures are based on mathematical formulas, and are convenient in that they can be automatically computed. Their disadvantage is that none are known to correspond perfectly to human perception. Due to differences in opinions among humans, a perfect correspondence might not even be possible. Nevertheless, some objective measures, such as the Mel-Cepstral Distortion (MCD) used in our experiments, have been shown to generally correlate to human perception of speech quality, and are useful as rough indicators of performance. In our best trials, the average MCD between speech synthesized from EMG and the actual recorded speech was 6.37. For the best ADS trials, the MCD was 6.69. A Mel-Cepstral distortion of 0 would indicate a perfect match, and for comparison, typical Voice Transformation from speech to speech, which produces intelligible, though somewhat unnatural sounding speech often has MCDs in the range of 5-7.

Subjective measures are based on collecting human opinions. In many subjective measures, a number of humans are asked to score a quality of speech, such as naturalness, on a numerical scale, and the scores are then averaged. The advantage of subjective measures is that the goal often is related to human perception, and these are the most direct methods to measure it. The disadvantage is that conducting experiments with humans can be a time-consuming, expensive process. For that reason, it is common to first use an objective measure and informally listen to synthesized examples to determine whether the results may be good enough to warrant a formal subjective evaluation.

After listening to synthetic speech both partially predicted from facial movements and completely predicted from facial movements, we decided that the intelligibility of the artificial speech was not yet high enough to warrant a formal subjective evaluation. The partially synthesized examples for both EMG and ADS were somewhat intelligible, but the examples fully synthesized from EMG were not. We were able to occasionally recognize words and phrases in the examples fully synthesized from ADS, however. We also found it to be speech-like, both in terms of how it sounded and in the similarities in the spectrograms, which are diagrams that display different sound frequency contributions over time.

Sound example 1 is a recorded sentence from our ADS evaluation set. Sound example 2 is the same sentence partially resynthesized from ADS data. The power and fundamental frequency were taken from the recording, but the spectral envelopes were estimated from the ADS data. Finally, Sound example 3 is the same utterance synthesized solely from the ADS data. Due to potential difficulties with predicting fundamental frequencies, we chose to use noise excitation to produce whisper-like speech for this experiment. Although more work is necessary to improve the intelligibility, our preliminary results are encouraging.

For more information on these topics, including links to publications, news articles, and example sound files, please visit http://www.cs.cmu.edu/~atoth/ASA2010.html.