Listen and Learn about more sounds!
The distance over which animals can detect the acoustic signals of other individuals is important in many ecological and behavioral contexts. Many animals, from grasshoppers in a small field to baleen whales in the open ocean, use acoustic signals to find or attract conspecifics and potential mates, and the farther away you can make yourself heard, the better the odds are for finding mates and transmitting your genes into the next generation. Other animals, such as some primates, birds and meerkats, live in groups where most animals can forage while a few individuals keep watch for predators and raise the alarm in case of danger. Obviously, the distance that these calls are heard plays an important role in group organization and likely places an upper boundary on the dispersion of the group, decreasing foraging competition within the group if alarm calls travel farther and group is more dispersed.

In the ocean, faster speed of sound and better sound transmission properties has emphasized the importance of sound for orientation and communication. Toothed whales in particular depend on sound for foraging and navigation as well as for communication with conspecifics.

Among the toothed whales, bottlenose dolphins figure among the most studied species. These animals live in fluid societies with complex social relationships that may be based to a large degree on prior experience with other individuals.

Communication sounds such as whistles are thought to be essential for recognizing individual dolphins and for mediating a variety of social interactions between groups or individuals. Estimates of communication range of these whistles therefore play an important part in our understanding of cetacean societies and the ecological processes underlying the social organization of bottlenose dolphins in particular.

Estimates of communication range allow us to answer questions about the maximum distance a mother-calf pair can separate while still remaining in acoustic contact. Also, it provides information about how often different groups or different individuals in a given habitat will encounter each other acoustically, and about the degree to which dolphins in a habitat will be likely to eavesdrop on the acoustic interactions between other dolphins in the area.

This study presents estimates of the communication range of indo-pacific bottlenose dolphins in a tropical shallow-water area typical of coastal bottlenose dolphins. Our study integrates measurements of whistle source levels, a physical measure of how loud the whistles are, with measurements of environmental factors such as sound transmission and background noise that together define the likely range of detection.

In contrast to a previous study conducted in Scotland, we show that dolphins in this tropical habitat are likely to hear each other over distances limited to a few hundred meters. Most of this difference is explained by much higher background noise levels caused primarily by the actions of hordes of tiny snapping shrimp that are abundant in tropical waters. Dolphins do not seem to use louder whistles to compensate for these high noise levels, and as a consequence they can be heard over shorter distances compared to dolphins investigated in more quiet conditions in Scottish habitats.

In addition, our results indicate that the energetic costs of producing whistles are minimal and would have a negligible effect on the evolution of whistling compared to other costs such as those incurred by eavesdropping conspecifics or increased risk of being heard by predators. 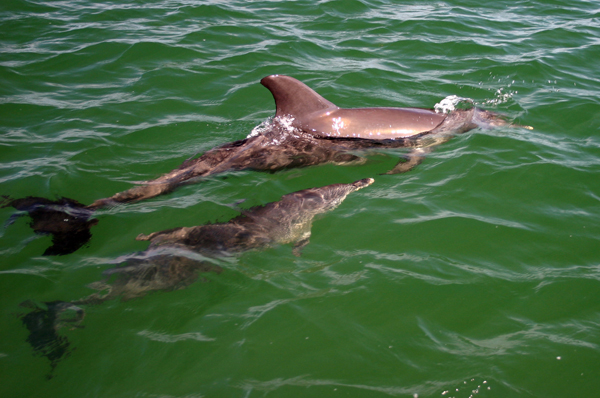 Figure 1. Bottlenose dolphin mother-calf pair in Koombana Bay, Bunbury, West Australia, during recordings of dolphin whistles. Calves depend on their mothers both for nursing and for protection. Whistles help maintain acoustic contact and initiate reunions when mothers and calves are separated visually, and the detection range presumably limits the range that calves can safely stray from their mother. 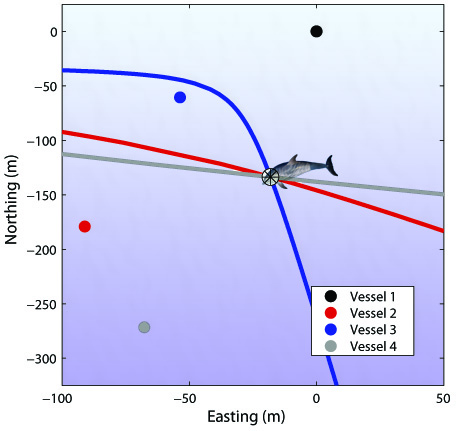 Figure 2. The dolphin producing each whistle can be found acoustically using time differences between several different recording vessels. Each pair of vessels (filled circles) gives rise to a hyperbola, and the intersection of several hyperbolas is the most likely position of the dolphin. This makes it possible to calculate how loud each sound was when it was produced.

Click below to play a series of bottlenose dolphin whistles during a meeting between two groups of dolphins in Koombana Bay, Bunbury, Western Australia. All sound recordings were made in collaboration with Murdoch University Cetacean Research Unit (MUCRU), Bunbury.