As top predators, crocodilians are very well equipped to probe their environment: excellent vision, highly developed smell, extraordinary abilities of mechano-reception, and an acute sense of hearing. These sensory abilities are also impressively useful during their social life: individuals interact visually, chemically and acoustically. Specifically, acoustic communication between females and their young is of primary importance for the survival of the juveniles.

In crocodilians, maternal care is the rule. The female lays her eggs in the sand or in a nest made with vegetation and guards them until juveniles hatch. At maturity when still inside their eggs, hatchlings emit calls and are responsive to their siblings’ vocalizations. This within-clutch communication synchronizes hatching. The mother also responds to these hatching calls: she opens the nest (Fig. 1), helps the young to get out of the shells and usually takes them in her mouth to the river or pond.

Then, she attends her young several weeks after hatching, actively protecting them from predators. During this period, juveniles communicate acoustically with their siblings and with the mother (calls series sounding like “umph umph umph” ). 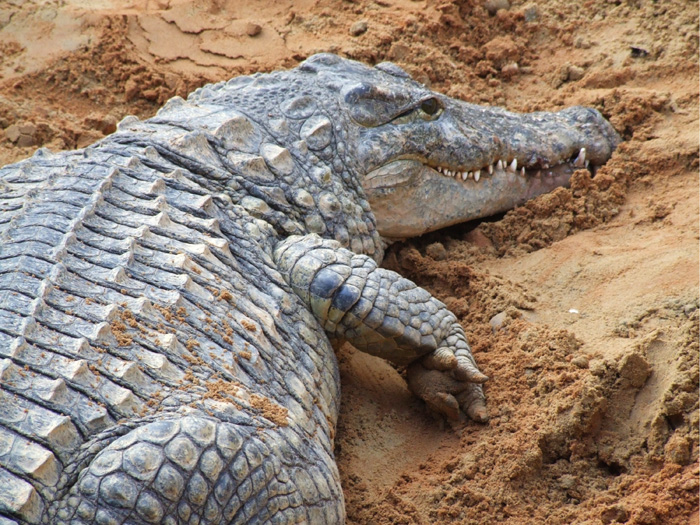 Fig. 1: A Nile crocodile mother digging the sand in response to her hatchlings’ calls.
It is only recently that biologists have started to decipher the precise mechanisms of acoustic communication in crocodilians. One major question concerns the information content in the call of juveniles. In the present study, we wondered whether these calls inform about the species identity, as most of birds and mammals’ acoustic signals do.

Crocodilians are split into two main families, Crocodilidae (e.g. Nile crocodile) and Alligatoridae (e.g. Alligator, caimans). We recorded calls from young juveniles of three different species (Nile crocodile Crocodylus niloticus, Spectacled Caiman Caiman crocodilus and Black Caiman Melanosuchus niger), and analyzed their acoustic structure. It appeared that calls could be easily distinguished between species using statistical methods of classification. Using playback experiments, we further tested to see if the animals could also discriminate between species calls. It appeared that juvenile Nile crocodiles (1 month old) were attracted to the loudspeaker whatever the species of the played-back calls, while they did not react to a noise.

We then modified the structure of the sound signals to see why calls from the caimans’ species were as efficient as the Nile’s calls to attract Nile crocodile juveniles. We found that the shape of the frequency modulation is the key parameter eliciting a behavioral reaction from juvenile crocodiles. When the original modulation was either suppressed or modified (signals FM1, Srev, 1Hrev, SLOPE2, FM2 in the figure), the signals hardly induced a behavioral response. Conversely, an altered call that kept the original frequency modulation shape (signals noAM, 1H, SLOPE1 in the figure) remained as efficient as the original call of the Nile crocodile (signal Control in the figure).

Listen to the altered call below

Listen to the original Nile call below 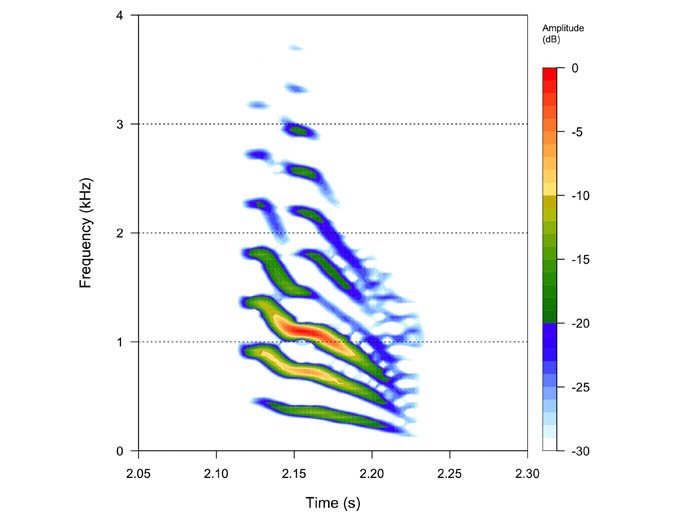 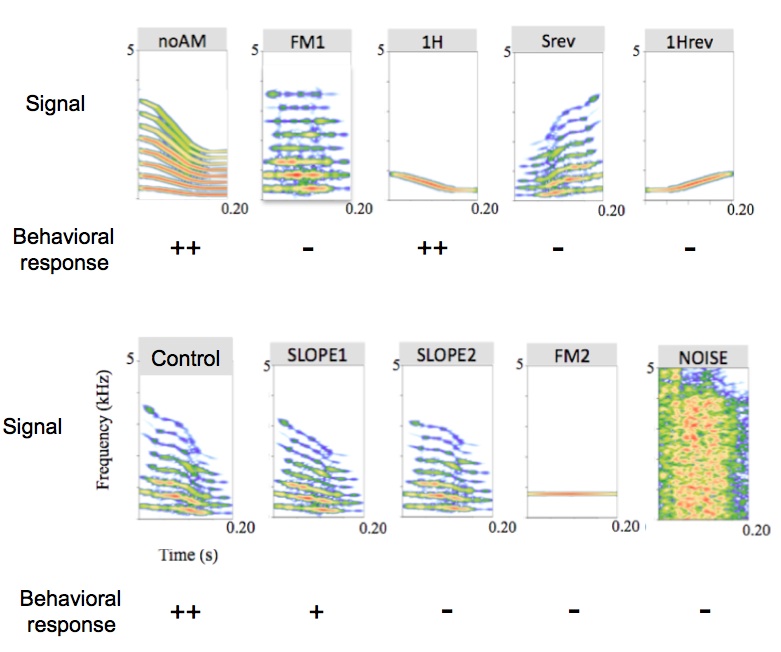 Fig. 3: Behavioral responses of juvenile Nile crocodiles to experimental sounds. Tested animals were highly tolerant to modifications of the acoustic structure of the calls provided sounds keep the frequency slope.
As the calls of the three species present similar frequency slopes, Nile crocodiles are able to “understand” the caimans’ vocalizations.

Crocodilians together with birds are the modern representative of archosaurs, a group that also includes the extinct dinosaurs and pterosaurs. In both crocodilians and birds, sound signaling is important during parents-young interactions. The use of acoustic communication in the context of parental care is thus likely to be a shared behavioral feature by all archosaurs, including those of the past. 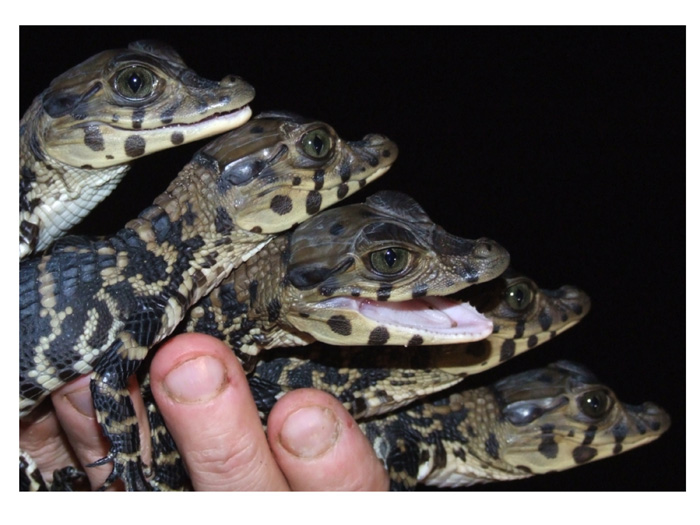 Modified Call: Modified call of a Nile crocodile juvenile. This call contains only one harmonics, but keeps the slope of the frequency modulation of the natural call. Nile juveniles do react to this sound.