Tigers, one of four species of big cats that belong to the genus known as Panthera, are seriously endangered in the wild.  Of the original nine subspecies that thrived throughout the Asian continent until approximately one hundred years ago, only five survive today.  Caspian, Javan, Balinese and South China tigers have, by all estimates, undergone extinction in the last 30 to 100 years.  One serious extinction pressure among many facing the tiger today is the ever advancing encroachment of humans into tiger territories.  The sounds of industrialization that necessarily accompany encroachment almost certainly raise the fraction of anthropogenic noise being injected into the home ranges of tigers, diminishing their capacity to communicate vocally, and adding to the escalating threat to the big cats’ long-term odds for survival.  The call that we are going to talk about at the upcoming meeting goes by a variety of names.  Some call it a moan, others call it an intense mew, and still others think of the call as a territorial roar.  We prefer the more generic term, long-distance advertisement call, because its ethological meaning is not well understood.  Our ultimate interest in the long distance call has less to do with understanding its biological significance, although that is of clear importance, and more to do with its utility as a conservation tool, as we will explain in the presentation.

Like other Panthera species, the tiger is known as a roaring cat, a vocal attribute of a specialized hyoid apparatus, a structure located at the base of the tongue that supports the big cat’s voice box and allows these charismatic mega-carnivores to produce ear-numbing low frequency calls that rumble through the forest, reputedly, for miles.  Sounding every bit like the mournful forecast of their seemingly inescapable extinction in the wild, the long-distance advertisement call appears to be the most common vocalization produced by the big cats both in captivity and in the wild, and it is most certainly not a forecast of doom – it is a social call clearly intended to advertise their presence.  The call, a deep throated ahh-rooom, has all of the acoustic properties necessary to resonate through the forest for very long distances.  Field biologists and naturalists talk of the call as “one of the most thrilling noises one can hear in the jungle.”  After listening to a sample or two of the call, it becomes immediately apparent why the most popular name for the call is the “moan.”

Precisely why the long distance call should work so well as a vocal communication tool in the taiga of eastern Russia, the home of the Amur or Siberian, tiger, can be gleaned from the call’s spectrogram.  The spectrogram is a graph depicting how the frequency content of the call changes over time.  Frequency is plotted on the vertical axis and time on the horizontal axis; the third dimension is the amplitude of component frequencies that are represented colorimetrically with white and yellow representing elements with high pressure levels and blue and purple representing low levels of production.

The pressure waveform of the long distance call is shown above each spectrogram in Figure 1. The call depicted on top was produced by a male Amur; the one on the bottom by a female Amur. The waveform is a relatively nondescript trace of the air disturbance produced by the utterance, although it does show the temporal variation in the amplitude of the call as it is broadcast. Long distance calls typically last about two seconds and are frequently repeated fairly often over the course of an hour or two. However, it is the spectrogram that tells the interesting and important lesson about the call’s long distance attributes. First, it is fairly clear that the call is made up of a series of frequency tracings that play out simultaneously over the duration of the utterance from beginning to end. Technically speaking we say that the spectrograms are dominated by distinct harmonically-related, frequency-modulated frequency sweeps. These relatively clear resonances give the call its tonal quality. There is, however, another level of acoustic complexity that is clear to the experienced eye; the call contains elements of nonlinearity and these acoustic features add an element of roughness to its vocal quality. But, more important in the context of our stated mission, the frequency band carrying the largest fraction of the acoustic payload, the frequency band painted yellow on the spectrogram, is well below 500 Hertz (Hz, or cycles per second), even closer to 200 Hz, and it is that attribute that imbues the call with its capacity to travel great distances. In fact, based purely on the rules of physics, a 200 Hz sound wave that measures 80 dB SPL (decibels sound pressure level being a logarithmic metric used to characterize the effective pressure of a sound relative to a standard reference level) 10 meters from its source can travel over 2 kilometers under ideal conditions. 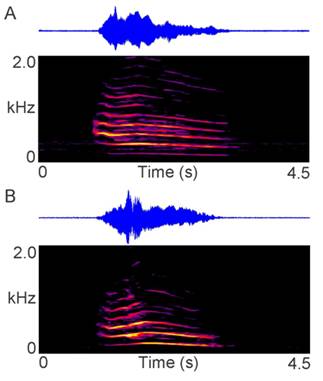 Click here to listen to the long distance advertisement call

Click here to listen to another long distance advertisement call

In Figure 2 a string of long distance calls produced by a tiger illustrates the variability and the simultaneous similarity of call production and gives insight into the extent to which the animal is able to control the acoustical form of the utterance.

For those technically inclined, we estimate the average fundamental frequency, f0, at 150 Hz, although it ranges from approximately 113 Hz to 176 Hz.  Overall peak frequency, the frequency exhibiting maximum acoustic power, is centered on average at approximately 330 Hz and instantaneous peak frequency often shifts from one harmonic to another throughout the call’s time course.  This is interesting because the shifting pattern of the dominant frequency suggests the possible shifting of dominant resonant cavities as the call is being produced.  The bottom line is that the bulk of broadcast energy (i.e., within 20 dB of the peak frequency) is contained in a band of frequencies ranging from ~100 to 800 Hz and bandwidth expands to approximately 3.7 octaves and 4.9 octaves at the 30 and 40 dB down points, respectively – the call is clearly dominated by low frequency components and that suits it well for long distance communication. 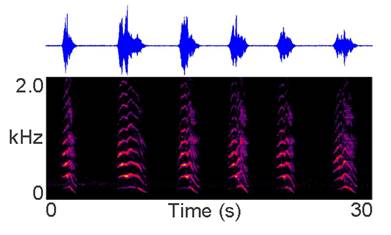 Figure 2. Recording of a string of long-distance advertisement calls from a tiger.

The social nature of the long distance call is illustrated in an exchange between two tigers interacting on the grounds of Omaha’s Henry Doorly Zoo in Figure 3.  Exchanges like these are a common feature of the Zoo soundscape, especially in the time frame between September and February, a particularly active breeding period.

An interesting footnote to this study is that some long-distance advertisement calls include energy in the infrasonic band, that portion of the spectrum below 20 Hz, below the frequency range that humans are able to hear.  However, it remains uncertain as to whether or not energy in this portion of the spectrum is an important acoustic feature of the call.  It may very well be epiphenomenal, a function of the massive size of the tiger’s vocal fold. 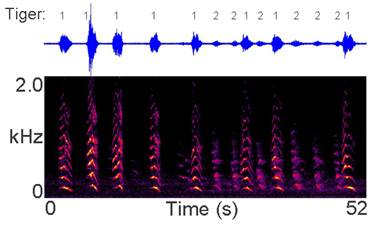 Click here to listen to the long-distance advertisement calls

In the end, there is no question that humans hold the future of the wild, free-ranging tiger in their hands.  Our ultimate goal, a goal that lies well beyond the biology classroom, is to use the call of the tiger to help save free-ranging tigers from extinction.  Understanding the impact of anthropogenic noise in tiger territory is one key element in the conservation equation.  Another is to know how many exist in the wild today, and the inaccuracy of current census estimates is well-known.  By learning how to recognize individuals on the basis of the acoustic properties of calls like the long-distance advertisement call and count them in the wild, an action that would provide conservationists with newfound census accuracy, we might give them a small edge in the fight for survival.
Manage Cookie Consent
To provide the best experiences, we use technologies like cookies to store and/or access device information. Consenting to these technologies will allow us to process data such as browsing behavior or unique IDs on this site. Not consenting or withdrawing consent, may adversely affect certain features and functions.
Manage options Manage services Manage vendors Read more about these purposes
View preferences
{title} {title} {title}
Go to mobile version