Social Recognition
Based on our own experiences, we know that humans can recognize other people by they way they look and by the sounds of their voices. Research on animal behavior, mostly in birds and mammals, indicates that other animals can also learn to recognize each other by their unique visual appearance and their individually distinct voices. This ability is known as social recognition and for many animals it involves cognitive processes: animals usually must learn about and remember the distinctive characteristics that distinguish among different individuals. One of the best-studied forms of social recognition in animals is voice recognition. Unfortunately, however, we still know little about how voice recognition occurs in animals and how it evolves over time. In this paper, I outline why frogs and toads may help us to answer both of these questions.

Voice-mediated Neighbor Recognition
Social recognition occurs in a number of different behavioral contexts, such as recognition between parent and offspring in a nest or colony, or between relatives or social group members. Numerous studies of songbirds have demonstrated a form of voice-mediated social recognition known as neighbor recognition, in which an animal defends its territory more vigorously against an unfamiliar stranger than it does against an established territorial neighbor so long as the neighbor stays in its territory. This discrimination is made based on recognizing the songs of a neighbor as those of a familiar individual. Some territorial songbirds, such as white-crowned sparrows and swamp sparrows, also use pitch as a voice recognition cue. Voice-mediated neighbor recognition is hypothesized to be an evolutionary adaptation that allows territory holders to avoid wasting time and energy in unnecessary and repeated aggressive interactions with their nearby established neighbors. If this is true, then we would predict that voice recognition of neighbors has evolved in other animal groups that are territorial and communicate acoustically. Enter frogs.

Voice Recognition in Frogs
Frogs and toads are among the most vocal of all animals. Generally speaking, male frogs call to attract females and to defend their calling sites or territories from other would-be suitors. Compared to research on birds and mammals, the role of cognition in frog communication has received little attention. Recent studies indicate, however, that learning and memory may play important roles in the behavior of some frog species in the context of voice-mediated territorial neighbor recognition. We now know that in at least three species of frogs in at least two different frog “families” (a taxonomic category), territorial males can learn to recognize their established neighbors by voice. This ability was first demonstrated in the North American bullfrog (Rana catesbeiana), but also has now been demonstrated in a European frog (Rana dalmatina) and a South American frog (Colostethus beebii).

A Case Study: Bullfrogs
My research on bullfrogs (Figure 1) has investigated the acoustic and perceptual bases of voice-mediated neighbor recognition. This work has shown that the pitch of the familiar “jug-o-rum” call of the male bullfrog is individually distinct (Figure 2). In other words, pitch differs more among different male bullfrogs than it does among the successive calls of any one individual bullfrog. The reason for this is that pitch is strongly size-dependent in frogs: larger bullfrogs produce deeper sounding croaks and smaller bullfrogs have croaks with a higher pitch. This size-dependence makes pitch a potentially good voice recognition cue. Here is a recording of a small group of 5-6 calling male bullfrogs. Some human listeners can distinguish among the different males based on differences in the pitch of their calls. (Can you?)

The important question, of course, is whether or not a territorial male bullfrog can learn to recognize his nearby territorial neighbors by the pitch of their calls. 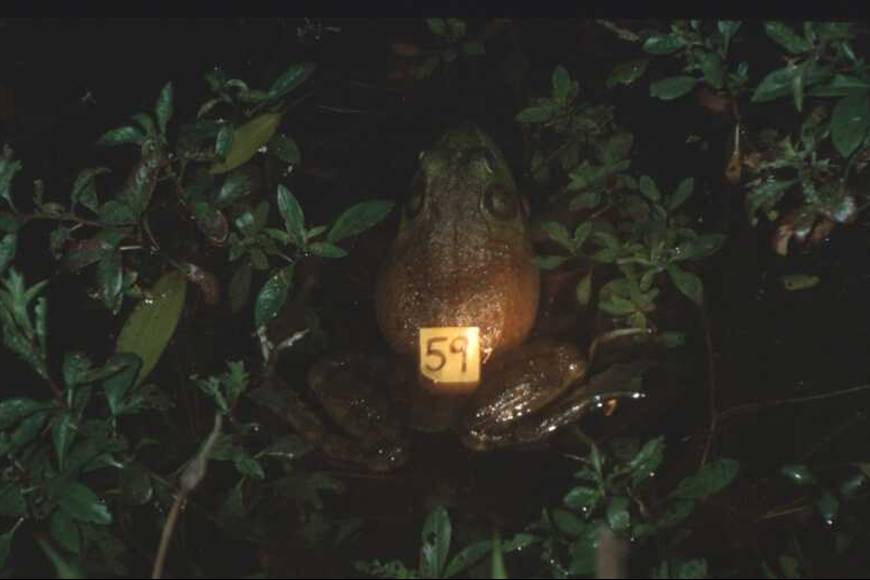 Figure 1. A male bullfrog sitting in its territory. 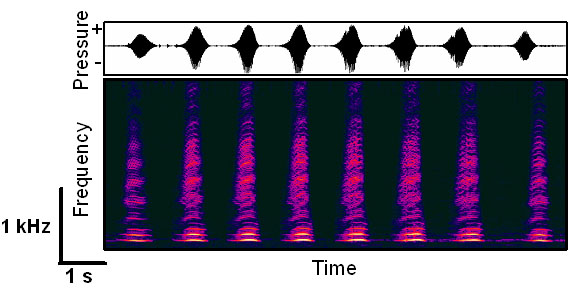 Figure 2. Visual depiction of the familiar “jug-o-rum” call of the North American bullfrog. The top trace shows the variation in sound pressure (amplitude) over time, and the lower trace shows the distribution of sound frequencies in the call, with more intense colors representing louder frequencies. Click here to hear this call.

I have investigated the perceptual/cognitive side of voice recognition in bullfrogs using field playback experiments (Figure 3) and an approach borrowed from human psychology called the habituation-discrimination paradigm. This involves using laptop computers and speakers floating on the surface of the water to broadcast digitally-constructed synthetic bullfrog calls to territorial males in order to simulate the arrival of a new and persistently calling neighbor. The goal has been to understand how the aggressive response of the subject habituates over time to the repeated perception of a calling neighbor and how “specific” the habituated response is to the acoustic and spatial properties of the stimulus. In other words, once a territorial male has habituated to a “new neighbor” and no longer interacts aggressively with that neighbor, we can change the stimulus in certain ways to probe recognition. What we find is that if we change some properties, nothing happens, but if we change others, the frog starts responding aggressively again. When this happens, we know that the altered cues is a salient voice recognition cue. This work has shown that male bullfrogs can learn to respond less aggressively after repeatedly hearing the calls of a simulated new neighbor, that discrimination among familiar and unfamiliar calls is mediated by individual differences in pitch and the sound source location, and that males can discriminate between familiar and unfamiliar calls based on differences in pitch in the absence of the spatial and contextual cues provided by the location of the sound source. Similar experiments have shown that bullfrogs can form long-term memories of the pitch of a familiar call. 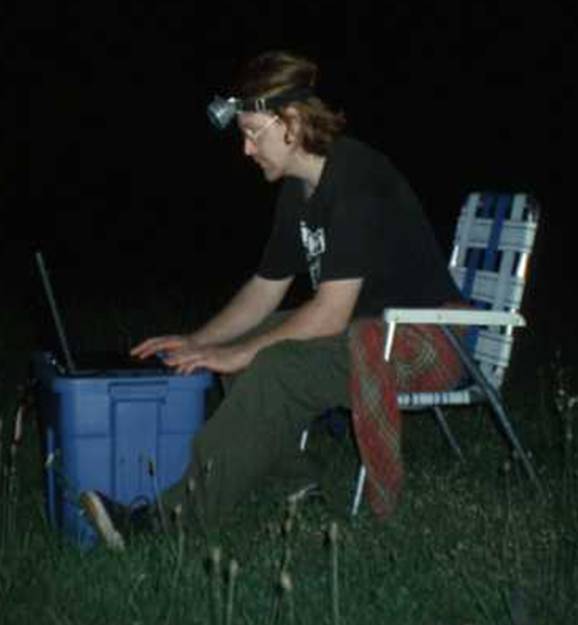 Figure 3. Field assistant Chris Bowling sits at his laptop and prepares to start a field playback test with a bullfrog.
The Frog Advantage
Apparently not all territorial frogs are created equal when it comes to recognizing a neighbor. I recently failed to find evidence for voice-mediated neighbor recognition in the territorial strawberry dart-poison frog (Dendrobates pumilio). This negative result may actually be important and prove to be an advantage for investigating the evolution of voice recognition. If it can be confirmed that some territorial frog species discriminate among neighbors and strangers based on recognizing voices and other species do not, then we can begin to ask questions about the evolution of voice-mediated neighbor recognition by determining the behavioral and ecological circumstances under which it evolves as well as the constraints on its evolution.

Summary
Frogs are not known for their cognitive abilities. However, the work summarized in this paper was the first to show that frogs possess the ability to learn to recognize a conspecific by an individually distinctive voice property. Not only does this work demonstrate some (rudimentary?) cognitive processing in frogs, it also demonstrates a degree of evolutionary convergence in the vocally mediated social recognition systems of territorial frogs and songbirds. By further studying voice recognition in frogs, we stand to gain a better understanding of both the neurophysiological mechanisms of voice recognition and its evolution.