Soundtrack for the Great Ball Court at Chichen Itza

The Mesoamerican ballgame has been called the sport of life and death. Thousands of ballcourts have been discovered throughout Mesoamerica. But the largest and finest ballcourt found to date is the Great Ball Court (GBC) at Chichen Itza, Mexico. 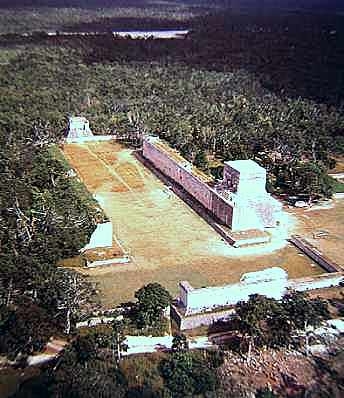 The “news” in this paper is that for the first time, acoustical mechanisms have been found and cultural purposes proposed for two remarkable acoustic effects at the GBC at Chichen Itza, a World Heritage site. These claims are certain to stir controversy. But it will be important news in archaeology if these findings have even partial validity.

Acoustical interpretations of sound at ancient sites are currently a hot topic for three reasons. First is the call for a new “archaeology of the senses” by two leading Mayanists, Steven Houston and Karl Taube. Second and third are recent book publications. “Archaeoacoustics”, edited by Chris Scarre and Graeme Lawson and published by Cambridge University (2006), grants legitimacy to scientific acoustical investigations of archaeological sites. “Spaces Speak, Are You Listening?: Experiencing Aural Architecture” by Barry Blesser, Linda-Ruth Salter, MIT Press, December 1 2006.

The GBC was dedicated in 1142 CE during the late post-classic period of the Maya. Architecturally the GBC is somewhat unique compared to ballcourts of the classic era (ca. 300-900 CE). The GBC has two remarkable acoustical features:

A profound flutter echo heard between two parallel walls of the playing field.

This echo may have had meaning to the Maya.

In the western architectural tradition, flutter echoes are always acoustical design defects. I suggest that the flutter echo was perceptually significant and cognitively meaningful to the Maya. A flutter echo was heard each time a ball impacted a wall of the playing field or the hard surfaces of a ballplayers protective gear. The flutter frequency for wall impact, just over 4 Hz. The flutter frequency for impact on player’s regalia is twice that. Perceptually, 4 Hz is the frequency of maximum human sensitivity for the auditory percept called “fluctuation strength” often chosen for warning signals because of its alerting properties. It also has the potential to trigger hallucination in those vulnerable. Cognitively, I suggest that flutter echoes in the GBC may have represented the chilling growl of a jaguar, or a rattlesnake about to strike (rattlesnake rattles are usually higher in frequency). This would have added drama to what has been called the game of life and death. Handclap flutter echo persisted for about 2 1/2 seconds. I believe that the long flutter echo is unique to the GBC and would not exist in classic Maya ballcourts. 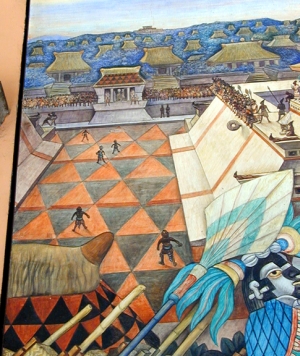 The whispering gallery permits excellent voice communication between two persons standing on the raised platform of temples on opposite ends of the ballcourt, 460 ft apart. It also permits two-way communication between persons on either temple and persons anywhere on the playing field between the temples. The whispering gallery seems unique in that it has no curved surfaces and no continuity of construction except for the earth. I believe that the earth plays little or no part in its workings. I suggest that the physical mechanism of the whispering gallery includes an acoustic waveguide 272 feet long. The waveguide consists of two smooth, parallel stone walls 119 feet apart and 28 feet high. The wide aperture of the waveguide’s opening appears to employ diffraction to efficiently beam sound into the end temples.

Some modern Maya have interpreted the flutter echo as voices of their ancestors.

In 1935, two Maya revolutionary soldier visitors were being shown about the Chichen Itza archaeological site.

The officers evinced great interest in everything they saw, particularly in the GBC, the largest pre-Hispanic ball court in Mesoamerica. Sound carries and echoes remarkably well within the broad channel of its two high walls, and Villa observed that

The phenomenon interested them so much that for more than 15 minutes we remained under one of the [stone] rings [in its walls] repeating phrases and names that then multiplied themselves indefinitely. For them this was nothing less than palpable proof of the current version [of legends to the effect that] the ancient Maya cities are enchanted places inhabited underground by the souls of their old inhabitants. So, upon hearing the echo, they did not accept it as an acoustic effect, but rather as a direct communication with their ancestors who thus demonstrated their real existence.

“Officers today recall that the delegation heard the voices of thousands of their ancient predecessors … coming from the Ball Court’s walls covered with bas-relief carvings of human form.”