The most convenient delivery of drugs into the human body is by mouth and the most effective drug delivery is by injection. Taking a drug orally is a very convenient and painless way of drug delivery; however it often coincides with many side effects such as an upset stomach and loss of efficacy (effectiveness) by metabolism in the liver. Delivery of drug by injection, on the other hand, can be painful and inconvenient since it must be often done in hospital settings.

Transdermal drug delivery of drugs from patches offers an alternative way of painless drug delivery. A patch can keep administering the drug for days with timed release. One difficulty in transdermal drug delivery, however, is that the outermost skin layer, known as the stratum corneum, is designed by nature as a barrier for invasion of foreign materials. A few drugs will penetrate the skin effectively. Nicotine, estrogen, scopolamine, fentanyl, and nitroglycerine are amongst the few that can be successfully delivered transdermally from patches simply because they are relatively small and potent at small doses of 0.1 mg to 15 mg /day. Many other drugs can be delivered only when an additional enhancement system is provided to “force” them to pass through the skin.

In this paper, we describe the transdermal delivery results of high molecular weight poly-l-lysines enhanced by ultrasound at a frequency of 20 kHz. The experiments were performed on human cadaver skin using a modified Franz diffusion apparatus. Poly-l-lysines of molecular weights from 2.5 kDa to 51 kDa were used as models for large drug molecules. (For comparison, erythropoietin and insulin have molecular weights of 48 kDa and 6 kDa respectively). The total amount of 51 kDa poly-l-lysine transported across the skin grew exponentially with the time when 20 kHz ultrasound of intensity 19 W/cm2 was applied. 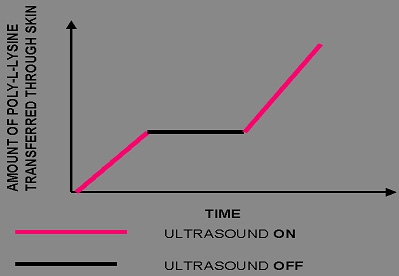 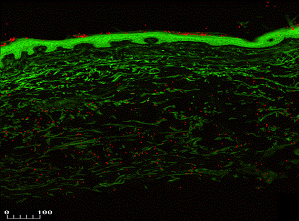 A confocal microscopic image of a cross-section of skin (1.5 µm thick) exposed to 20 kHz in the presence of an aqueous suspension of 1mm fluorescent micro-particles. Micro-particles shown in red are visible in the dermis layer of the skin. (The scale bar represents 100 µm).

Confocal microscopic image of a cross-section of a piece of skin exposed to 20 kHz ultrasound in presence of the aqueous suspension. The 1 mm fluorescent micro-particles are shown as red micro-particles diffused through the layers of skin. Since there was no indication of observed holes through the skin, micro-size transient pathways might have been generated in the skin during exposure to 20 kHz ultrasound.

Confocal microscopic image of a cross-section of a piece of skin exposed to 20 kHz ultrasound in presence of the aqueous suspension of the 1 mm fluorescent micro-particles indicates that the red, fluorescent micro-particles diffused into the skin and embedded themselves inside of the skin layers. Since there was no indication of observed holes through the skin, micro-size transient pathways might have been generated in the skin during exposure to 20 kHz ultrasound.

Our experimental results indicate that 20 kHz ultrasound is very efficient in enhancing delivery of large molecules through the skin. Passage of micro-particles of up to 25 mm suggests that the application of 20 kHz ultrasound can generate micro-pores in the stratum corneum and transient micron-size pathways in the epidermis. Generation of the pores facilitates the transdermal delivery of large molecules and micro-particles.

Our research results also suggest that the application of 20 kHz ultrasound will make it possible deliver transdermally such drugs as protein drugs, anti-tumor drugs, and DNA vaccines which are presently only able to be delivered by the inconvenient IV method.

Further optimization of the ultrasonic parameters will provide a real chance that ultrasonic drug delivery may soon become a safer and painless alternative to the use of a needle.