What Did Dinosaurs Hear?

Dinosaurs have long fascinated both scientists and the general public and are often popularized in films and documentaries. Unfortunately, we know very little about their behavior because most of w hat we know of these magnificent creatures comes almost exclusively from skeletal fossil remains. Mammal-like reptiles were the dominant land vertebrates several hundred million years ago, but most of these creatures perished in the Permian-Triassic extinction event (around 250 million years ago). The remaining Archosaurs (Greek for ‘ruling lizards’) are today represented by birds and crocodiles but this group also included the dinosaurs, which became extinct about 65 million years ago. Fortunately, the inner ears of archosaurs (birds, crocodilians, and extinct dinosaurs) show a high degree of structural similarity. This enables us to make predictions of the function of the inner ear in extinct species based on relationships among similar variables in living birds.

Here we attempt to draw some conclusions regarding hearing in dinosaurs on the comparative analysis of relevant data in living archosaurs (crocodiles and birds), the systematic group to which dinosaurs also belong. 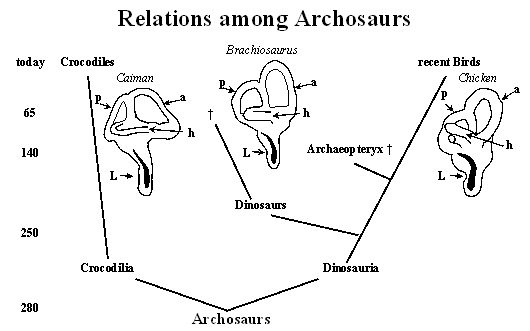 The above diagram (commonly called a cladogram) illustrates our present knowledge about the relationship among archosaurs. The numbers to the left indicate the time scale in million years. Each branching point represents the last living common ancestor. The first branching led to crocodilia (repres ented today by crocodiles) and the sister group of dinosauria. This group gave rise to the dinosaurs and the ancestors of recent birds with a side line represented by Archaeopteryx (which became extinct about 140 million years ago). Today’s birds are the closest living relatives of the extinct dinosaurs. Illustrations of the labyrinth of caiman (modified from Baird, 1974), Brachiosaurus and chicken (modified from Gleich et al., 2004) are also included. These show the semicircular canals (indicated by arrows: a, anterior; p, posterior; h, horizontal) and the extension of the Lagena (L) which contains the auditory sensory epithelium (the basilar papilla, shown as the black area). There is considerable similarity in the anatomy of the labyrinth among all archosaurs in spite of large differences in scale. It is on the basis of this similarity that we can draw conclusions about hearing in extinct dinosaurs based on their living relatives.

Within the archosaurs, there is an incredible variation of body size ranging from small birds (10 g and less) to Brachiosaurus brancai, the largest representative of dinosaurs (75 tons). Also the length of the auditory sensory epithelium, the basilar papilla varies, however, the range is only 2 – 12 mm. In small birds, the size of the head and therefore the size of the basilar papilla is limited. Analyzing the correlation between basilar papilla length and body weight (one measure of the size of an animal) for recent archosaurs revealed a systematic relationship between them (specifically, a relationship between the logarithm of body weight and the papilla length, see figure below). By extension, a line describing this relationship also provides an accurate representation of similar data from the two dinosaurs (Allosaurus fragilis and Brachiosaurus brancai) where the dimensions of the basilar papilla can be derived from fossils (see Gleich et al., 2005).

The diagram above shows the body weight as a function of the length of the basilar papilla for all archosaurs where we could obtain the relevant data (caiman, 20 bird species, Archaeopteryx and 2 dinosaur species). The evolutionary relationship among these species is shown as a tree by groupings suggested by Feduccia (1980) and Olson (1985) with the extinct species listed in italics. In the left diagram different symbols are used to represent caiman and groups of birds. Data from the extinct Archaeopteryx and the two dinosaurs are represented by grey symbols.

The only species that shows a gross deviation from the data of all other archosaurs is the barn owl (cross at a papilla length of 11.75mm and 350g). This is probably related to its highly specialized auditory system for hunting at night in complete darkness (see Gleich et al., 2004). On this basis, we have excluded owls from the next step in our analysis. On the other hand, the data from Archaeopteryx (2.4 mm / 486g) and the two dinosaur species (Allosaurus fragilis with 8.0 mm / 1.4 tons and Brachiosaurus brancai with 10.7mm / 75 tons) fit well with the typical archosaur pattern and strongly suggest we can estimate auditory function for these extinct species based on the analysis of hearing in their living relatives. 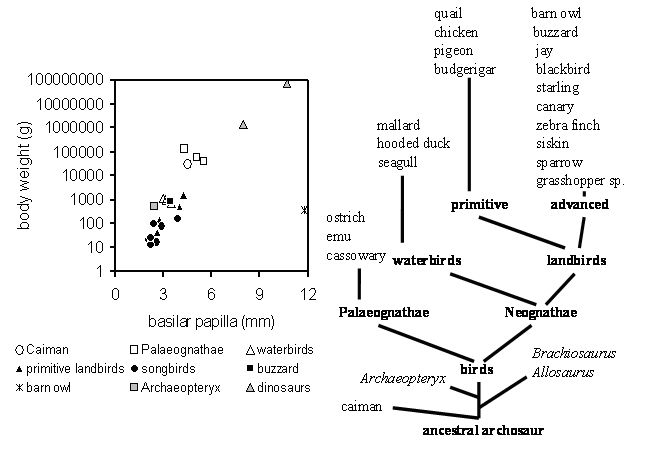 The most general way to characterize an organism’s hearing is to obtain an audiogram. To make an audiogram, one plays a series of pure tones ranging in pitch (frequency) from low to high. For each tone frequency, the audiogram maps out an organism’s “hearing threshold,” the minimum loudness level required for the organism to hear the tone at that frequency in a quiet environment. Dooling (1992) noted systematic differences in the audiograms of different orders and families of birds. One feature of the audiogram is the best frequency, the frequency where the threshold is minimal. In the present analysis we show systematic relations of the best audiogram frequency with the body weight (below left-diagram for 26 bird species) as well as the papilla length (below right-diagram for 8 bird species) for the available data from living archosaurs.

These points can also be seen in the figure below by comparing the frequency range of best hearing for some representative species. Thresholds are shown as a function of frequency for humans (thick continuous line) and dogs (dot dashed line) as mammalian representatives (data taken from the tables listed in Fay, 1988), the great tit (dotted line) representing a small songbird (from Langemann et al., 1998) and a prediction for Brachiosaurus brancai (wide gray line) based on the analysis presented above. The dotted area extending from the high-frequency limb of the human audiogram towards lower frequencies (small arrows) indicates a progressive high frequency hearing loss that is, to a variable degree, characteristic of the hearing of many elderly humans. 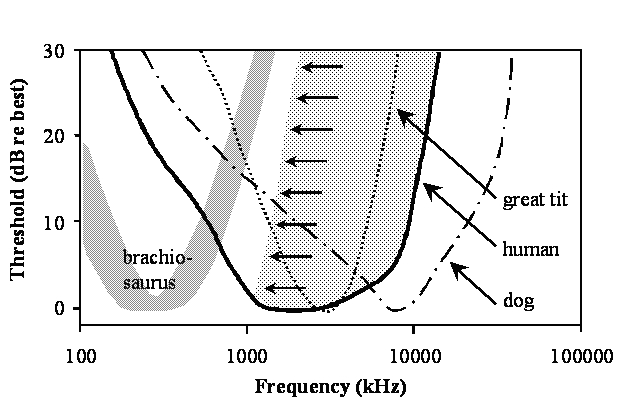 These curves show that hearing in dogs (and many other mammals) extends to frequencies in the ultrasonic range above 20 kHz, much higher than in humans and archosaurs. The high frequency limit in birds is below that of normal hearing humans and large dinosaurs have an even more restricted range of high frequency hearing (below 1.5 kHz) well below that of humans. Because the modern world is very noisy, it is not uncommon for aging humans to experience a progressive high-frequency hearing loss. In jest, we sometimes irreverently refer to aging humans as ‘dinosaurs.’ Interestingly, as hearing in aged humans becomes more limited at high frequencies, it does in fact become more like that of the dinosaurs!!

Feduccia, A. (1980) The Age of Birds. Harvard University Press, Cambridge.