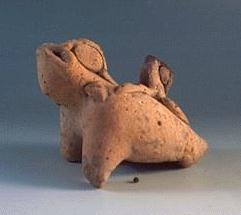 Three double or paired clay whistles found buried in Small Acropolis temples (650 – 800 a.C.) of Yaxchilan, Chiapas, Mexico, were examined. They were made like frogs in singing position. 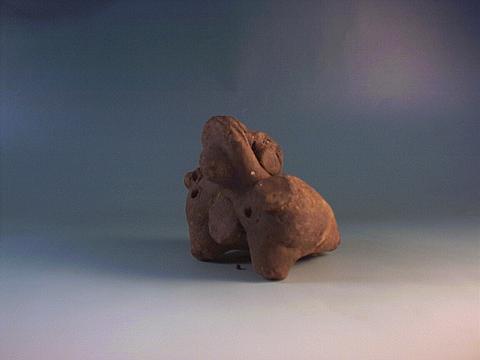 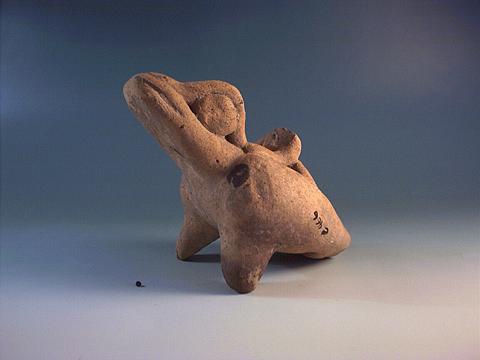 Some scholars say that clay whistles were simple toys, but it was found that clay-frogs can sing like natural frogs and possibly, their choruses were used in ceremonies to the Mayan god of rain Chaac and other shamanic rites. These possibilities were inferred by considering the following evidence:

Frog figures were included in the huipil or k’ub of Lady Na Xok carved on the beautiful lintel 26 of Yaxchilan.

Frogs appear in the first breakthrough in the decipherment of Mayan hieroglyphs by Tatiana Proskouriakoff in the Pacal tomb. The glyph T740 meaning “birth” or “was born” was called “upended frog” (the virgule shows that it is speaking or singing). It appears with glyphs of the birth dates in the Maya system of several Mayan rulers, like on lintels 29 and 30 of Yaxchilan associated to Bird-Jaguar IV, 9.13.17.12.10 8 Oc 13 Yax (709 a.C.) and 9.16.0.14.5 1 Chicchan 13 Pop (752 a.C.) of Shield-Jaguar II on lintel 13. Also, it appears in many carved stones like in stele 3 at Piedras Negras.

Zac (frog) also appears in the glyph of 11th ulinal (month) of the haab (the Maya solar calendar of 365 days).

The Lacandon jungle is abundant in herpetological species. At present, 77 species are registered (65% of the possible species), belonging to 55 genera, grouped in 24 families of amphibians and reptiles. The frogs were abundant at the shore of the Usumacinta river in an humid and warm jungle, at less than 500 m above sea level and with six months of heavy rain.

It is not probable that the Yaxchilan’s whistles had been used with other more powerful Mayan instruments like the ones shown in Bonampak murals, in big plazas or open spaces, unless they were played in big groups to produce loud chorus like those of natural frogs. Paired whistles are the most noticeable evidence that our ancestors liked to play whistles simultaneously to produce beats and interference patterns. The chorus of clay frogs can produce infrasonic beats and it is possible that they had been used in shaman rites to generate special states of conscience. Their music was related with the sacred sounds from the jungle. The signals of clay frogs could be used in communications with frogs from the rainforest. 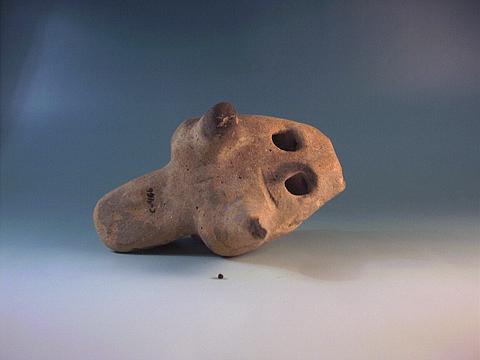 The design of their sounding mechanism is similar, with a curved edge. This indicates that the whistles were designed with the same organological technique and they could be constructed by an artisan community but their exact origin is unknown.

The observed acoustical effect of the sounding mechanism is a noisy sound. The Helmholtz equations were applied and the fundamental frequency F0 was found for each single whistle (1010 Hz – 1160 Hz), their quality factor Q (50 – 88) could be estimated and the range of their real pitch was measured (800 Hz – 1400 Hz). The whistles were not tuned to a standard pitch, but it was confirmed that they can produce beats or phantom sounds. It is known that infrasonic beats can produce special effects in humans due to the excitation of neurons in the cortex of the brain and they are used to improve mental and physical health.

The spectrogram shows the frequency components of short wav sounds from whistle C-381, played softly in dual mode, uncovering the two tonal holes to modify the pitch and to imitate a frog call. The variation of the dB level was obtained vibrating the tongue inside the mouth during the blowing. It is shown that the pitch of the fundamentals increases generating microtonalities, no harmonics are produced and the two signals in time and frequency domains are similar but not equal. The origin of the beats is clearly shown with the difference in pitch of the two signals.

It is not easy to make this kind of whistles, but some experimental replicas were made. The radiated acoustic power of the replicas (0.0005 – 0.003 Watts) played in different modes, are low compared to other louder replicas such as a Mexica tlapitzalzintli (little flute) (0.02 Watts) that could be heard at a distance of 500 meters in Teotihuacan site as well as an Olmec whistle of black stone (0.3 Watts) and a Maya gourd trumpet of Bonampak (0.2-0.8 Watts) played in its two first modes. The frog-whistles may be more powerful than other whistles like other Mayan and Zapotec whistles (0.0005 Watts). Small clay whistles played in groups can produce chorus very loud.

The Small Acropolis plazas must have been an adequate seat for the acoustic utilization of clay frogs because they were surrounded by several structures. The characteristics of this restricted complex, which is away from the main ceremonial center give the impression of having been used by a selected group. The rooms of temples, the grottos and the caves are also acoustically ideal to play the clay frogs’ chorus and as an aid in religious rites by reduced groups of shamans or H-men priests.

The whistles were made and used before the construction of the Small Acropolis, because the whistles were found in refilled sites. The clay frogs were not trash or “killed”, because they were buried complete. It could be considered as a kind of offering to the gods and the sacred frogs venerated in that site and they could “live” and be played by the habitants of Yaxchilan’s underworld and adequate to be used in Labyrinth’s rites. The (re)discovery of these clay frogs means, in a Maya sense, that they were reborn in this world. Their deep analysis allows us to rescue, recognize and recreate them in our reality.

Note. This first formal analysis of ancient Mayan whistles was included in an MS thesis on Mexican aerophones. The clay-frogs were selected, because they belong to the great culture that prevailed in the South West of Mexico and Central America, including Cancun, which is the seat of the first Special Sessions on (Ancient) Sounding Instruments – Ancient Acoustics III and IV and to joint the Honor to Robert Capranica (Amphibian Bioacoustics). But, thousands of preterit instruments found and stored at museums, collections and explorations, are waiting to be systematically analyzed.