Kelly Benoit-Bird is a marine scientist at Oregon State University who studies how animals in the vast oceans of the world interact with each other – and she does it most of the time without even looking at them. What Kelly does is use acoustics to bounce sound waves off these marine creatures to determine their size, their movements in the water, and how many of them there might be.

Already in her young career, her studies have taken her around the world. Kelly has studied the voracious Humboldt squid off Mexico, looked at the feeding habits of sea birds and fur seals in the frigid northern waters of the Bering Sea, and analyzed marine communities in a deep undersea fjord off the spectacular coast of New Zealand.

Her experiences are extraordinary considering Kelly is the first member of her family to have attended college. She already has received prestigious awards from the MacArthur Foundation, the White House, the Office of Naval Research and the Acoustical Society of America for her research.

“If you ask my parents, they’ll tell you that I knew in elementary school that I would somehow end up doing something that related to oceans,” she said with a laugh. “Of course, I had no idea then what a marine scientist was, or whether you could make a career out of it. And the idea of using acoustics to study animals would never have entered my mind.”

As it turns out, Kelly Benoit-Bird not only uses sound waves as a tool to study marine creatures, she is very good at it. Two years ago, she developed a technique that would allow scientists aboard a ship to locate squid on sonar, which is a lot more difficult than it sounds. Squid, you see, don’t have bones or swim bladders, so there is little for a signal to “bounce off” and create an acoustical image. So Kelly developed an analysis approach using multiple frequencies or pitches of sound– and it worked like a charm.

Why is that important? For one reason, many whale species love to eat squid, but it had been difficult, if not impossible, to estimate how many squid are in a certain location. And many scientists thought whales couldn’t use “echolocation” to hunt for squid for the same reason acoustics had previously failed. Now scientists are looking at how the whales themselves use multiple frequencies to locate prey.

Kelly also has made important discoveries about how spinner dolphins off Hawaii hunt for food, using acoustics to track their movements through the water that are so sophisticated, it would put a synchronized swim team to shame. The dolphins in these groups themselves use sounds higher in frequency than humans can hear to communicate with each other to maintain their elaborate formations and synchronize their feeding behavior.

“Technology is really advancing rapidly,” the Oregon State University scientist said, “and it can open up a lot of doors to scientists. Luckily, I’m not intimidated by technology and trying new things. My dad was a mechanic and when I was growing up, I was always in his garage helping him, so I learned how to tinker.”

That mechanical ability also encouraged her to use new computer software to track the ballet-like moves of the dolphins and share the information with other scientists and students on her web site. Kelly also has an artistic side, however. She draws her own illustrations of marine creatures for the journal articles and book chapters she writes.

“Everyone should choose a career that they are passionate about,” Kelly said. “Being a scientist can be a lot of hard work, but if it’s something you love doing, it’s worth every minute. For me – it’s about the animals. I love learning why they do the things they do and how they survive in a world hidden from our view.” 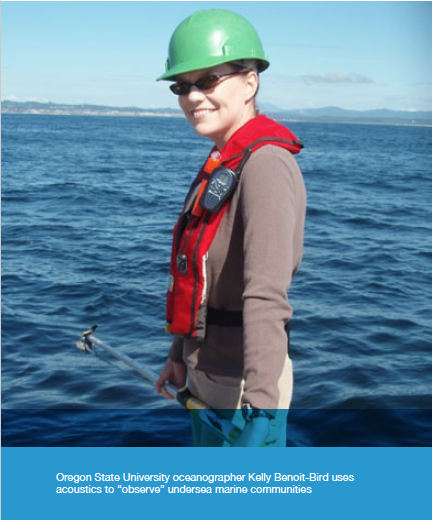 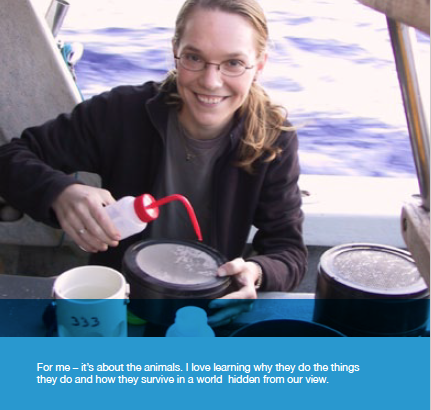